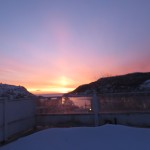 It seems super fitting that I would watch this sunrise of Signal Hill as I began producing/composing/recording a new album as part of the RPM Challenge. What’s the RPM Challenge you ask? It’s a challenge to write and record an entire album of original music within the shortest month of the year.

I’ve been thinking a lot about how our world needs more peace, wishing so badly I could provide a place where everyone could feel safe and supported. I’ve decided to do that through music.

I’ve partnered up with two composers I greatly admire from Portland, Oregon to create SUNSET SUNRISE which will feature music to meditate to. I met Kim Henninger and Shawn Parke of Cathedral Sounds at the Ashland Independent Film Festival last year. They were screening a feature film they created the soundtrack for, Embers and I instantly fell in love with their music.

It’s now Feb 19th and we’ve finished recording our tracks for the album. Kim and Shawn did a wonderful job programming such soothing and uplifting electronics. Moksha Yoga St. John’s yoga instructor, Stephen Vardy created a beautiful meditation instruction for those who are new to the meditation practice. I recorded the effected flute and bansuri parts which were inspired by many breathtaking sunrises and sunsets during the past few weeks as well as Paul Horn’s INSIDE and Kraftwerk’s RALF UND FLORIAN (from 1973). I’ll be working with recording engineer, Stephen Lilly as we mix and master the album.

Nothing like working under a tight timeline to get ‘er done! We can’t wait to share our work of love with you and we hope it will be a nice cozy blanket to help keep you feeling peaceful, grounded and healthy during your challenging moments.

I'll be sharing my favourite self-care tips for th

LET ME NOT SEE MYSELF AS LIMITED ❤️ Josh and