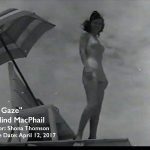 “The Gaze,” from MacPhail’s 2016 MusicNL award-nominated album “From the River to the Ocean,” was inspired by “the nostalgic vibe of Thomson’s film and poem. “Her film reminds me of those moments when we ache to return to a special moment in our lives,” says MacPhail. “Not all songs flow naturally out of me but “The Gaze” did. It’s one of my favourite songs to perform in front of a live audience.”

Of the film, Thomson says “The Gaze” is an experimental film inspired by a 1947 civic film I found during an artist residency at Cucalorus Film Festival in Wilmington, North Carolina. Fascinated by reactions to the camera, I picked out every moment a citizen gazes directly at us. The original film is entitled “My Hometown: A City Sees Itself” and was 16mm film transferred to analogue video then to digital file. Losing a generation with each transfer, the film’s history is reflected in its format. The lyrics that inspired Rozalind’s song are about the personal connections I feel when gazing back at a familiar place and its people on screen.”

Shona Thomson is a Scottish artist/curator/producer with a predilection for connecting archive and silent film with live performance to ideas of place: akindofseeing.co.uk

Rozalind MacPhail is set to perform at the 2017 ECMAs in Saint John, NB. Details and other performance dates can be found at https://www.rozalindmacphail.com/shows.