Thanks to the Nickel Independent Film Festival for having me compose and perform a live score for Roger Maunder’s Super 8 Challenge film, “Moments” during opening night of the festival. The performance was recorded and will be posted online with the film. 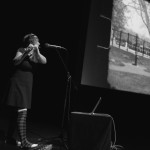